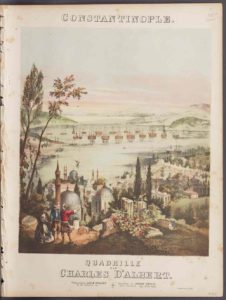 The staff at the Mendel Music Library invites you to view our new exhibit in our display cases on the first floor of the Mendel Music Library. While we at Mendel are particularly interested in the music and lyrics of this collection, the true star of this exhibit is the decorative lithographed cover art that graces all 33 of the vocal and piano music title pages on display. Clicking on an image will bring up the full-size version of the cover sheet. 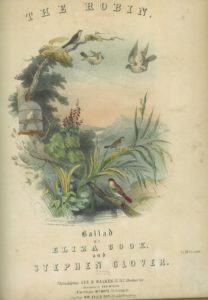 One title page has dramatic all-black-ink background, while another is printed on light blue paper throughout. 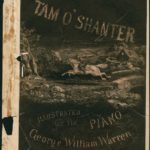 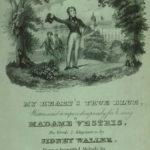 The exhibit in Mendel is spread across three cases, curated by Music Librarian Darwin Scott with help from the Mendel Music Library staff. The first case mixes everyday existence and fanciful stories, with images of Little Red Riding Hood, family life, and animals ranging from marching cats to fluttering robins and waltzing grasshoppers.

The third case contains portraits of women and men, with several depicting renowned dancers (including Fanny Elssler), singers, and statesmen from the time. Note the contrast between the stereotypical military pomp and swagger of the contemporary male world with idealized delicate, gentle, succoring, and grieving mid-century womanhood throughout the cases.

The mid-nineteenth century between the late 1820s and the end of the 1870s was the heyday of the lithographed sheet music cover, and our examples date from the early 1830s through 1868. As a low-cost means of reproduction, lithography first developed in Germany in the late 1790s with Alois Stenefelder in Munich, and began appearing on music covers in the late 1820s, starting with David Claypoole Johnston in Philadelphia in 1828, spreading rapidly in the 1830s to Boston, New York, Baltimore, and Cincinnati—and moving west and south in the next decades to St. Louis, New Orleans, Charleston, and San Francisco. The artful lithographic images by engravers such as the Endicotts of New York (seen in several of our examples) provide decorative previews of the music inside by depicting the content or theme of the song, and served to help the music sell, often at a much higher price than unadorned publications, commanding 25 for black ink to as much as 75 cents for elaborate colorings (an odd 38 cents appears on several of our examples). Such illustrated sheet music soon dominated the sale of commercial music.

These lithographs can be used to trace America’s development through song. Three examples in the exhibit also illustrate the vogue for such decorated title pages in European music published during the same period. The music, lyrics, and imagery are products of the time period, often focusing on politics, war, and other contemporary issues, as well as showcasing the popular music of the time for enjoyment at the home piano. Melodies and subject matter are often sentimental, such as “Oh! Fly Away to My Homeland.” They view other cultures through a white American (and often racist) lens, such as the “Indian Hunter Quickstep” and a plethora of minstrel songs.

The covers featured in this exhibit are only a microcosm of highlights from the Mendel collection of nineteenth-century sheet music, which numbers over 4,500 titles in our locked collection. We are in the process of digitizing this entire collection, and the first volumes will show up in the Princeton University Digital Library early in 2019. Meanwhile, please visit Mendel to view these beautiful objects of art and American popular culture.